Hong Kong’s initial public offering (IPO) market plunged 91.3% to US$2.7 billion in the first half of 2022, from US$31 billion a year ago, according to data compiled by Bloomberg.

Volumes in the second quarter of 2022 was particularly low, with only US$0.8 billion in offerings, the lowest number for a quarter in a decade. 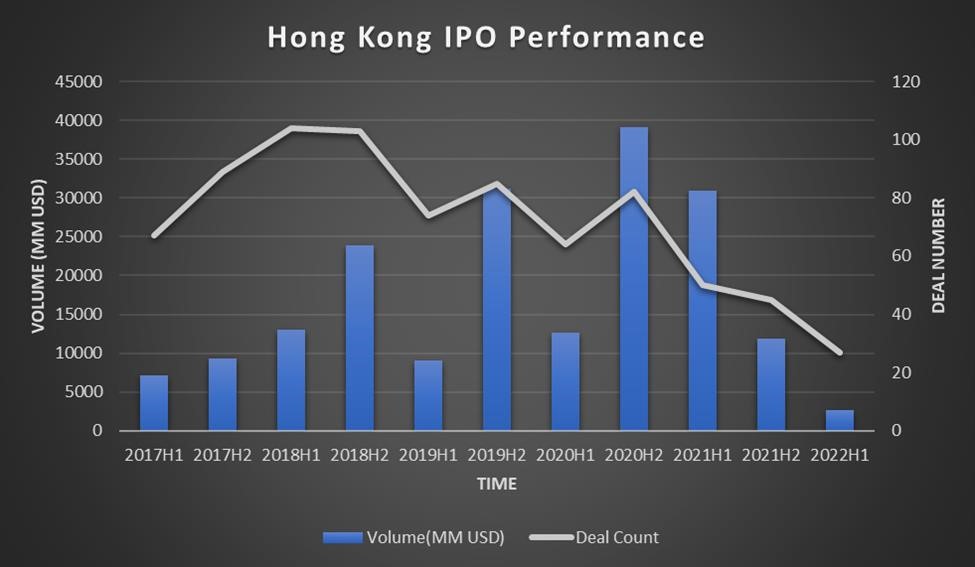 Meanwhile, China’s A-share IPO market volume surpassed that of the United States for the first time, making it the world’s largest IPO market during the period.

Some reshuffle of the top banks was seen in the shrinking market condition. According to the latest Bloomberg League Table report, a number of investment banks, such as BNP Paribas, DBS Group, Zhongtai Securities, and Valuable Capital, made it to the top of the ranking and outperformed their larger peers. BNP Paribas, in particular, jumped by 51 places to the very top, becoming the top IPO bookrunner in Hong Kong with a market share of 11.7%.

Another significant trend is the increase in gross fees in Hong Kong. The average fee rose to 2.64% in the first half, from 1.95% in 2021, making it more expensive to list in the Hong Kong market. Still, the fees are lower than in mainland China and the United States.

Returns were also lacklustre, Bloomberg says. For the most part, the Hong Kong market had been enjoying positive returns, with the first-month return closing up 31.4% year-on-year in 2020 despite the Covid-19 outbreak. In the first half of 2022, however, it recorded a 4.9% loss on average. 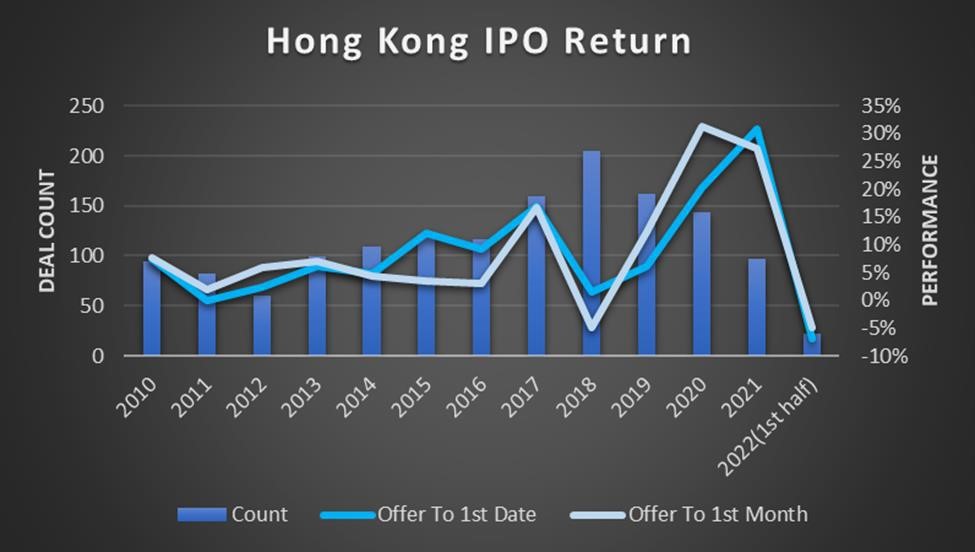 In the second half of 2022, the market has seen a recovery with 15 IPOs raising US$2.3 billion in July, almost as much as what was raised in the first half. Among the 15 deals, Tianqi Lithium’s US$1.71 billion IPO is the largest deal so far this year, and the first over US$1 billion deal since September last year.

Also, a total of 10 IPO applications from special purpose acquisition companies are awaiting approval by the Hong Kong exchange, with each seeking to raise at least HK$1 billion (US$127 million).

Sharnie Wong, senior analyst at Bloomberg Intelligence, says: “Hong Kong’s initial public offerings could stay slow even after the slump in funds raised in the first half of the year. Investors may stay wary amid China’s pursuit of ‘Covid-zero’ and lack of clarity on the easing of Beijing’s regulatory crackdown. IPO applicants need to navigate a web of new cybersecurity, national security and overseas listing rules.”